Exploitation comes in all forms. Some people have the strangest ideas about "helping" rural arts.

Ever since I started planning the Daricha web portal a few years ago, I couldn't help but notice, more than ever, the complete lack of respect so many people have for our rural artists. Why is it that the minute we see that the seller is from a disadvantaged section of society, all our exploitative skills come to the fore? Would we haggle over an identical piece mounted on a fancy frame or tucked into a fancy box at a Quest Mall? While there is no dearth of examples to illustrate my point, here is one: at a mela, I witnessed a well dressed woman haggling over the most superbly woven grass box, the creation of a tribal artist from Jangol Mahol, priced at a paltry Rs 100. Shamelessly, she demanded (yes, demanded) to be given two for the price of one. 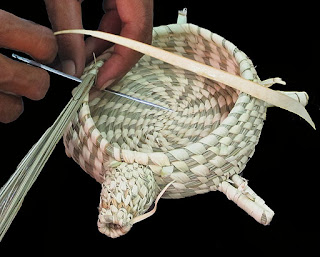 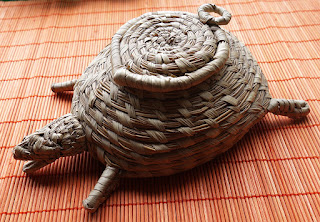 Elsewhere, I began to notice how enterprising "designers" were selling kantha "stitch" clothes or pata chitro art on various objects. No problem there, except the work was actually being executed by rural artists, while the business person grabbed all the credit. These artists are treated as "kaarigars" or labour by these "designers", with absolutely no respect or recognition for the hundreds of years of traditional heritage that they represent. And the artists, by dint of their poverty, are forced to depend on the "piece work" doled out to them.

I then began to realize how some "designers" were making a neat packet by selling "repackaged" folk art. Buying cheap, mounting it on a fancy frame, and selling dear, often way too dear. The artist of course receives a pittance. Evidently, Fair Trade is unheard of in these quarters...

The last straw was an incident that took place very recently. As you may know, the Daricha web portal was started with the aim of spreading awareness about not just folk and tribal arts but the artists as well. The portal attempts to educate people about how important it is to respect these people and their art, if we have even an iota of appreciation for the need to preserve our heritage. So, we encourage people to write to us with enquiries about how to contact artists.

Along came this lady, who in her mail to us, expressed a wish to get a Kalighat style patachitra made on the theme of city life. So I promptly recommended an artist, well known for his work on such themes. Turns out she wanted to buy such art as part of an interior decoration project and she thought she would be doing the artists a favour by buying their "wares". Unfortunately, she thought such art should come cheap. Therefore the artist, who has exhibited both nationally and internationally, and whose prices she had already enquired into, was considered too expensive. In her words, she was "looking for artisan work and not high art" (read: cheap work). She evidently believes that a traditional artist cannot evolve - and that their prices should remain rock bottom. I tried telling her that making city life parodies was not part of the traditional oeuvre of the other artists, and that their ideas should come from within - not be borrowed/imposed. But she was focussed on "cheap".   Frustrated, I let the matter drop. 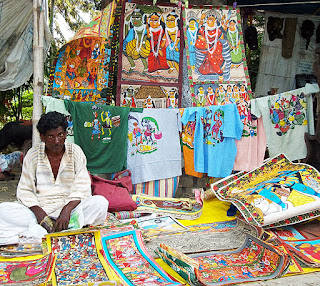 But that was not the end of the matter. A few days ago, I heard from the artist himself that a relative of the lady in question had sent for him, wanting to see his work. The artist, constantly in the hope of making a sale, travelled to Kolkata from his village - only to be told that he could be offered no more than five hundred rupees for his work, with perhaps a promise to buy more, should he concur.  This artist's work normally sells for anything between Rs 5000 - Rs 20000 or more.   The artist returned home without making a sale. The artist told me that this happens to him all the while. One can imagine then what happens to traditional artists whose works are actually priced at 500 rupees ...

Of course, thankfully, the pendulum swings the other way too. There are many amongst us who would go the extra mile in order to support these artists - ordinary people, like you and me. There are also so many individuals and NGOs doing remarkable work, quietly, behind the scenes.   Unfortunately, they represent only a tiny minority.